Take Control Of your Body

Take control of your weight today.
Your DNA holds the secret.

how can Muhdo help me Lose Weight?

A Muhdo DNA profile will help you identify the key lifestyle points you need to change, allowing you to understand what you personally need to lose weight. Your DNA profile will allow you to discover and hyper-personalise:

How Many Calories
Your Body Needs 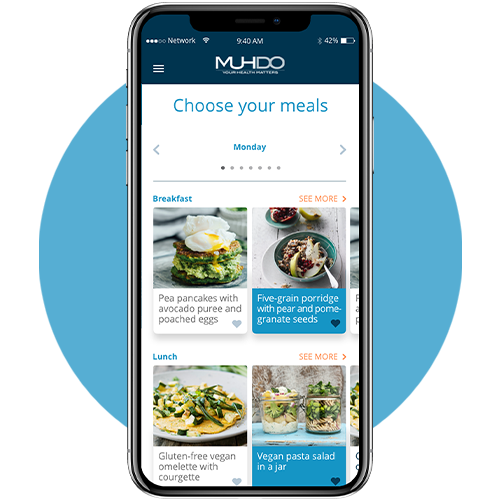 How Can a DNA Test
Help Me Lose Weight?

Adjusting your diet to suit your specific DNA will help you to lose weight more easily, as certain diets work for people with a particular genetic makeup. The Muhdo DNA test will help you to further understand your potential struggles with weight loss.

Potential vitamin and mineral deficiencies can have a knock on effect on weight gain. A Muhdo DNA test will allow you to highlight these potential genetic health risk factors.
Compare Kits In Our Shop

How Can Epigenetics Help Me Lose Weight?

Epigenetics enables you to track what you’re doing and monitor where you are with your weight loss goal. Track your internal health by measuring your gene expression changes over time.

Muhdo’s aim is to guide you with hyper-personalised information allowing you to change habits and create positive outcomes.

Learn about you. Learn about how you react to what you eat and your environment. Without good data we cannot create a baseline.

Everyone is different. There is no catch-all plan. The data and knowledge we have gained must be tuned into a bespoke and focussed set of changes to your life.

The greatest plan in the world will fail if it cannot be maintained. Be realistic and be honest. Aim high but be ready to adjust your sights.

How can i lose weight fast and easy?

There is no way this can be done safely, effectively and efficiently. Yes, you can lose weight quickly by manipulation of diet and training, but this is generally a slow process.

A step by step action plan should be adhered to and maintained, to remove the temptation of a quick fix. Quick fixes don’t work in the long run and put you further away from your goal.
Shop Now

There are 3 types of fat:

Unfortunately there is no one best way to lose belly fat. Everyone is unique, as their DNA suggests, but there are a few simple actions that you can do that will reduce that visceral fat. It’s not just a case of counting your calories, you should be paying attention to exactly what you’re eating and drinking.

Now those are out of the way, let’s look at the dos…

How to lose weight fast and easy
There is no way this can be done safely, effectively and efficiently. Yes, you can lose weight quickly by manipulation of diet and training, but this is generally a slow process. A step by step action plan should be adhered to and maintained, to remove the temptation of a quick fix. Quick fixes don’t work in the long run and put you further away from your goal.
How to lose weight fast without exercise

Exercising without addressing your diet is the first major mistake that people will make when trying to lose some body fat. Getting your diet right will always take precedent over exercising when it comes to burning fat. Coupled with manipulating your hormones in your favour.


So firstly, we need to look to reduce the foods which increase insulin levels such as, breads, cereals, flour and sugars. Then look to reduce inflammatory foods, which in many instances are the same foods as above and will have a negative effect on many extremely important metabolic reactions.


Putting diet to one side for a second, we also need to look at reducing and stabilising cortisol/stress levels and improving your sleep (easier said than done). For instance, sleep deprivation has an immediate effect with an increase in cortisol levels and a decrease in HGH (Human Growth Hormone) production. So, if you’re staying up late your cortisol levels will likely be through the roof, and you will literally be breaking down your muscle tissue for energy at an increased rate.


Let’s say we take 2 people following exactly the same 1500 calorie diet with a completely different hormonal response. What do you think will happen? Yes, you guessed it, they will have a completely different reaction to those same food groups and calories. And if either of them has higher stress levels, what do you think will happen? Their cortisol will be constantly elevated, thus breaking down beneficial muscle, whilst increasing fat storage. As soon as we’ve eaten a particular food our hormones are in complete control of where those foods are actually going.


We also need to remember a calorie needs to be judged upon the context that it comes from. Let’s take a quick look at protein for a second. The basic structural unit of protein includes amino acids, with digestion of protein resulting in its breakdown and release of individual amino acids. Classically there are nine essential amino acids that are required in the daily diet, as the body cannot make them.


Amino acids are required for the synthesis of tissue protein and other metabolic functions:

So, in that brief explanation you can quickly see how important protein is, and the vast array of roles that it is utilised for. Simply put, a calorie of protein is far superior in term of “specific physiological requirements” compared to a carbohydrate.

Your entry into the world of DNA discovery. Uncover the truth about your body.
Find Out More

Go beyond genetics with Epigenetics. Track how your lifestyle affects your genes!
Find Out More
Trustpilot
.
We use cookies on our website to give you the most relevant experience by remembering your preferences and repeat visits. By clicking “Accept”, you consent to the use of ALL the cookies.
Do not sell my personal information.
Got It
Privacy & Cookies Policy